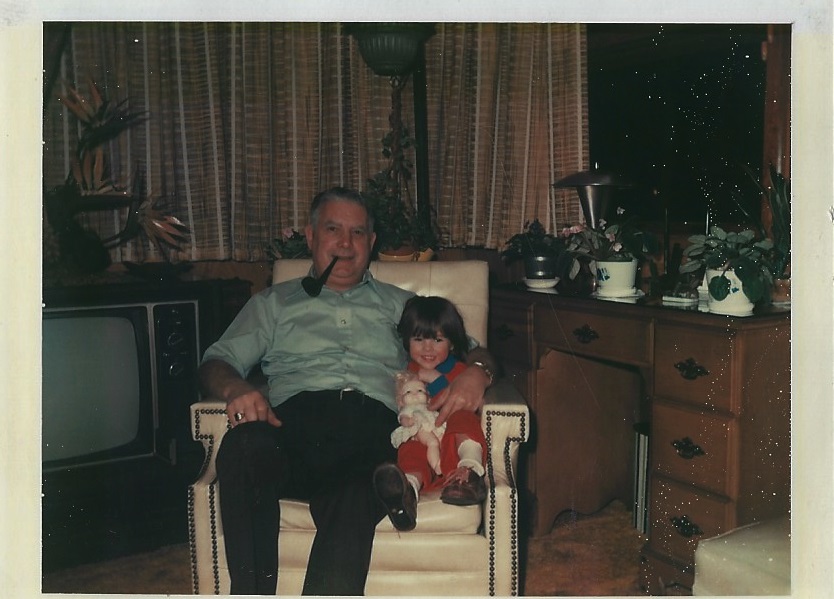 "The Work of Unknown, Good Men"

I was in high school before I realized that my maternal grandfather was an accomplished pilot, consummate writer and irrefutable badass.  He and my grandmother lived three blocks away from our childhood home, so naturally my brother and I spent a lot of time at their house.  My grandmother was a feisty, whirling dervish who bopped from morning golf outings to her afternoon bowling league in her snug, white tennis skirts.  She wore brightly colored lipstick, bold costume jewelry and never stopped talking.  There was a running joke with my elementary school friends that my grandmother was the only person who could drive through downtown while simultaneously using the sun visor’s vanity mirror the entire time.

My grandfather retired from a long and successful career at Goodyear Tire & Rubber Company.  His home office was flanked with floor to ceiling black metal bookcases.  The top shelves showcased oversized World War II model airplanes and glass bottles filled with intricately engineered miniature ships.  The shelves just above my adolescent head were lined with thick books with single word titles stamped in dark, block text:  “EXODUS,”  “CHESAPEAKE,” “SHOGUN” and “ROOTS.”  Not a single one lured me to crack open the cover.  There were awards from the Lions Club, framed pictures from executive trips to Jamaica or Hawaii and random pieces of string art and paint by numbers that had apparently occupied his attention for a while.

My memories of him are extremely fond, but not remarkable.  Meaning, they aren’t studded with fascinating stories from his childhood or homespun fairy tales.  The man rarely uttered more than a couple dozen words on any given day.  When you stepped down into their sunken living room, you could rest assured you would be greeted by the smell of cherry pipe tobacco and the voice of a baseball announcer, but not by grandpa.  He was often seated at the surprisingly sturdy card table with the thatched, removable overlay that was a permanent fixture in the middle of the room.  There he employed a felt-tip marker to place a single dot under each character in Sunday’s church bulletin.  He would tally how many a’s, b’s, etc. had been used and compare it to the totals from the week before.

In youth, we don’t wonder much about anyone’s story but our own.  Emily Dickinson must have been talking about teenagers when she said, “To live is so startling it leaves little time for anything else.”  Thankfully, at some point I started to crawl out of my own self-absorbed bubble and ask questions about Gramps’ life before Goodyear.  True to form, when I started asking, he didn’t answer with audible conversation.  I don’t know if it was out of humility or habit, but he didn’t voice his story aloud.  He just laid out the breadcrumbs.  He handed me typed journal pages, handwritten flight logs, an Air Medal and the Distinguished Flying Cross from 1945.  I gobbled up the pieces of his past like a rabid dog.  He had been a masterful B-17 pilot and successfully completed over 30 European missions during the final months of World War II.  His detailed personal diaries described sudden jumps in altitude when bombs were released from the cargo bays and the lost weight would force the aircraft up, “as if the hand of God was plucking us out of the sky.”

I had been playing croquet, grilling hamburgers and losing at checkers alongside a valiant warrior who artfully chronicled his way through war and peace.  The only time he ever spoke at length about his experience in the United States Air Corps was when we muscled him in to speaking, in uniform, to my eleventh grade US History class.  Afterward, he hung his uniform back in his closet, and returned to his word search.

Today, social media is abuzz with people dumping and declaring what they know and feel to be right.  Capital letters and exclamation points and bold indignation, oh my.  You have to cover your ears to drown out the screeching and blaming and doomsday prophesizing.  Instead of following those angry threads down the proverbial drain, look for the breadcrumbs that led to today’s hero stories.  “Curbside Dinners” being brought to you by the Outer Banks Relief Foundation.  “Healthcare Heroes” being brought to you by Upstate University Hospital.

Goodness doesn’t always get the glory it deserves.  True champions often fly under the radar. Their missions accomplished aren’t emblazoned on banners.  Their lasting contributions to the world emanate a healing glow at each new dawn, not blinding spotlights after a curtain call.  Thomas Carlyle said, “the work an unknown good man has done is like a vein of water flowing, hidden underground, secretly making the ground green.”  Life is lush because goodness makes it so.  This is how hope springs eternal.  This is why we will all get by.  This is how we will all survive.